I'm Jacob O'Bryant, maker of Yakread and other tools for online speech. I write about practical ways to make the internet better.

As I planned last week, I've made a Major Update to Yakread's timeline. It is now mostly chronological. The most recent posts from your subscriptions will always show up first, or at least near the top. Same for articles you bookmark. But there are some key differences from, for example, your email inbox.

You can think of Yakread's timeline as two separate timelines, mashed together: a regular chronological timeline, and an algorithmically-driven "in-case-you-missed-it" timeline. Every post that Yakread might show you is first assigned to one of those two timelines. The timelines are sorted individually, and then they're interleaved together. The chronological timeline takes precedence: 75% of the items in your feed will come from there, until it runs out. The remainder comes from the algorithmic timeline (which is usually larger).

For example, you can see that the third post (from Ghost Resources) in my feed is from 13 November, which means it must have come from the algorithmic timeline: 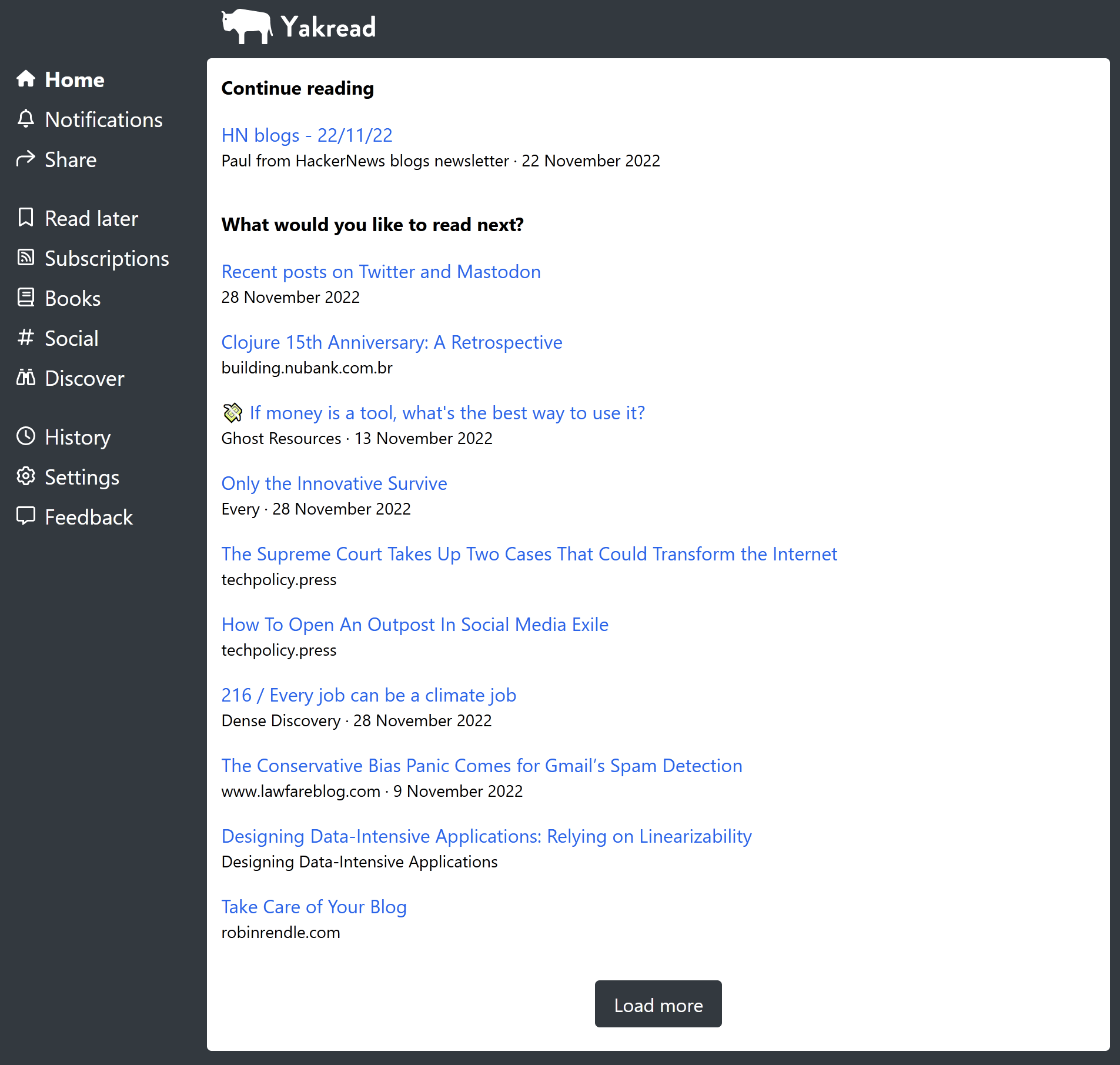 Yakread uses a few simple rules to decide if a post should be moved from the privileged chronological timeline to the algorithmic timeline:

This way you can keep tabs on everything new coming into your feed. You'll see posts in a timely manner, and you don't need to worry about if the algorithm is suppressing anything that you'd like to see. And yet your feed won't get overrun with too many subscriptions (or with subscriptions that post too frequently), and the algorithm will help to resurface anything that you do miss.

I've been using this new timeline heavily since releasing it several days ago, and I think it really hits the sweet spot. There's always something interesting to read.

With the new timeline in place, I now believe the core Yakread experience is "good enough." There is plenty of refinement to do for sure, but after one more week I'm going to make growth the top priority. Yakread is still living on borrowed time after all. I need to figure out if I can get it to provide a real income, and if not, figure out a plan B.

So for this last week, I'll get as far as I can on the following list:

However much of that I complete, on 5 December I'll switch to my growth TODO list:

Once Yakread is on an acceptable growth trajectory, I'll try to get a good cadence between these and my two other TODO lists, "Bug fixes and feature refinements" and "Internal stuff so the website doesn't explode."

EU’s Top Telecom Regulator: Big Telecoms’ Proposal to Force Websites to Pay Them Puts the Internet at Risk | Barbara van Schewick | Stanford Law School
"[A]fter the BEREC report’s unflinching conclusions, it will surely be more difficult for ISPs to push through changes to the European Internet that are built upon flawed and self-serving assumptions and would severely harm European internet users, without even the slightest guarantee they would make it anything better."

First impressions of Bluesky's AT Protocol | Eric Rescorla | Educated Guesswork
"Far more than any of the technical details, what made Bluesky interesting when compared to (say) Mastodon was that it was designed under the auspices of Twitter with the stated objective of being used by Twitter. If Twitter actually adopted ATP, then suddenly ATP would have a huge number of users, getting you past the entry barrier that other new social networks have to surmount. However, I was always pretty skeptical that this was going to happen, for two reasons."

The Conservative Bias Panic Comes for Gmail’s Spam Detection | Blake E. Reid | Lawfare
"As a practical matter, this lawsuit is alarming because it frames email providers as agents not for their users but for the senders of email, limiting or maybe even eliminating the ability for providers to offer spam detection services, which would make email effectively unusable. [...] I want to dig into the legal merits of the RNC’s claims, which I think are dubious."

Two years of Discord | Ryan Broderick | Garbage Day
"It feels like there’s been a lot of talk about decentralization over the last two years, but not a ton of discussion about what it actually would look like. Well, it looks like this. It looks like dozens of 'Twitter alternatives' flying around. It looks like viral Substack posts coming across your feeds from writers you may have never heard of before. It looks like random videos from apps you don’t use being texted to you. And it look like screenshots of Discords you aren’t in."

Wikipedia Is More One-Sided Than Ever | Larry Sanger
"[N]eutrality is not the same as objectivity. If an encyclopedia is neutral about political, scientific, and religious controversies—the issues that define the ongoing culture war—then you will find competing sides represented carefully and respectfully, even if one side is 'objectively' wrong. From a truly neutral article, you would learn why, on a whole variety of issues, conservatives believe one thing, while progressives believe another thing. And then you would be able to make up your own mind."

I've got a little tools-for-online-speech Discord server you're welcome to join. Also feel free to email me.