Last week I somewhat impulsively built Discord Forum Publisher, a Discord bot which creates a publicly viewable version of your Discord server. You click a link to add it to your server, then within 10 minutes, the contents of any forum channels will show up at discord.tfos.co. Here's a post from the #feature-requests channel on my own server, for example: 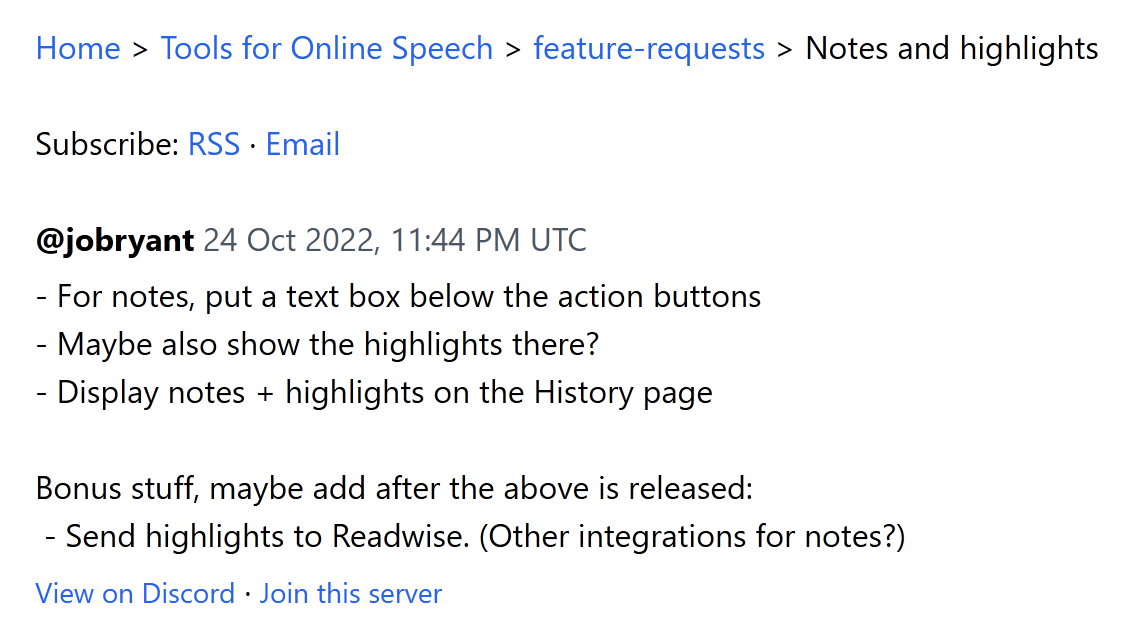 My primary motivation for building this is to make it play more nicely with this newsletter: I want to link to posts without having to say "make sure to join the Discord server first, otherwise you won't be able to see them." This way, people can view the posts I link to whether or not they're signed in, and then if they want to join the discussion, there's a handy "Join this server" link right there. Plus if you want to follow a particular discussion (e.g. for updates on a feature request you're interested in), you can subscribe via RSS or email—no need to install the Discord app just to get notifications.

I had another question in my mind, though: with all the uncertainty around Twitter's future now that you-know-who has taken over, could Discord be a promising destination for refugees?

Discord has a lot going for it:

So the Forum Publisher bot doubled as a proof-of-concept to see if Discord could be repurposed for public conversation, in the same vein as Twitter. I wanted to find out if I should continue developing it and try to bring more of a Twitter-like experience to Discord.

My conclusion is: maybe. I think it's completely doable from a technical standpoint. The API is capable of pretty much everything that's needed. See here for a list of all my posts, for example. If more servers installed the Forum Publisher bot, that page would include all my posts from any of those servers. I'd just need to add a couple subscribe buttons for email + RSS, make the page look prettier, and boom: a Discord version of my Twitter profile page. Subscribe to a bunch of people from your favorite RSS reader, and you'd have your own Twitter-esque feed of Discord posts. (It wouldn't hurt to build in a simple reader into the Forum Publisher website, too.)

There could even be some federation to a degree, since anyone could host their own Forum Publisher bot (the one I wrote is open-source, but it wouldn't be hard to recreate from scratch). Though I'm not sure how much that really matters since Discord itself is obviously not federated.

Perhaps the biggest thing that couldn't be changed is the data model: Discord is organized into servers (i.e. user-created communities); it's not just a big jumble of users as on Twitter. You also don't have nested threaded replies like on Twitter. The experience would thus never be exactly like it is on Twitter, however, I don't necessarily see that as a problem. It might not work for people with tons of followers, but I'm not one of those people so I don't care too much 🙂.

All that being said, I'm personally not planning to put more effort into going down this path. Why not?

Private servers are part of Discord's culture. Take this passage from one of Discord's developer documentation pages for instance:

Discord Servers are often private places. Even in public servers, though they're welcome for everyone to join, people have a sense that what they're doing is in that community, and not mirrored or copied somewhere else. Be mindful of who on your team has access to information, as well as under what privileges you show users access to it. For example, data about a specific server--even anonymous and aggregated--should probably be limited in access to just people in that server with proper permissions.

For another example, consider user bios. I was looking into the API docs to see how they could be copied onto the Forum Publisher website. But it turns out that Discord staff consider bios to be sensitive enough that there isn't a way to get them via the API, no matter what permissions you request. Coming from Twitter, that may seem surprising, but it makes total sense in the context of Discord's more-or-less private communities.

However, I would still be concerned about breaking Discord's norms. Would Discord natives who join any of these public servers realize that their posts are being syndicated to who knows where? On my own server, I have at least added a notice about this which is shown to all new users: 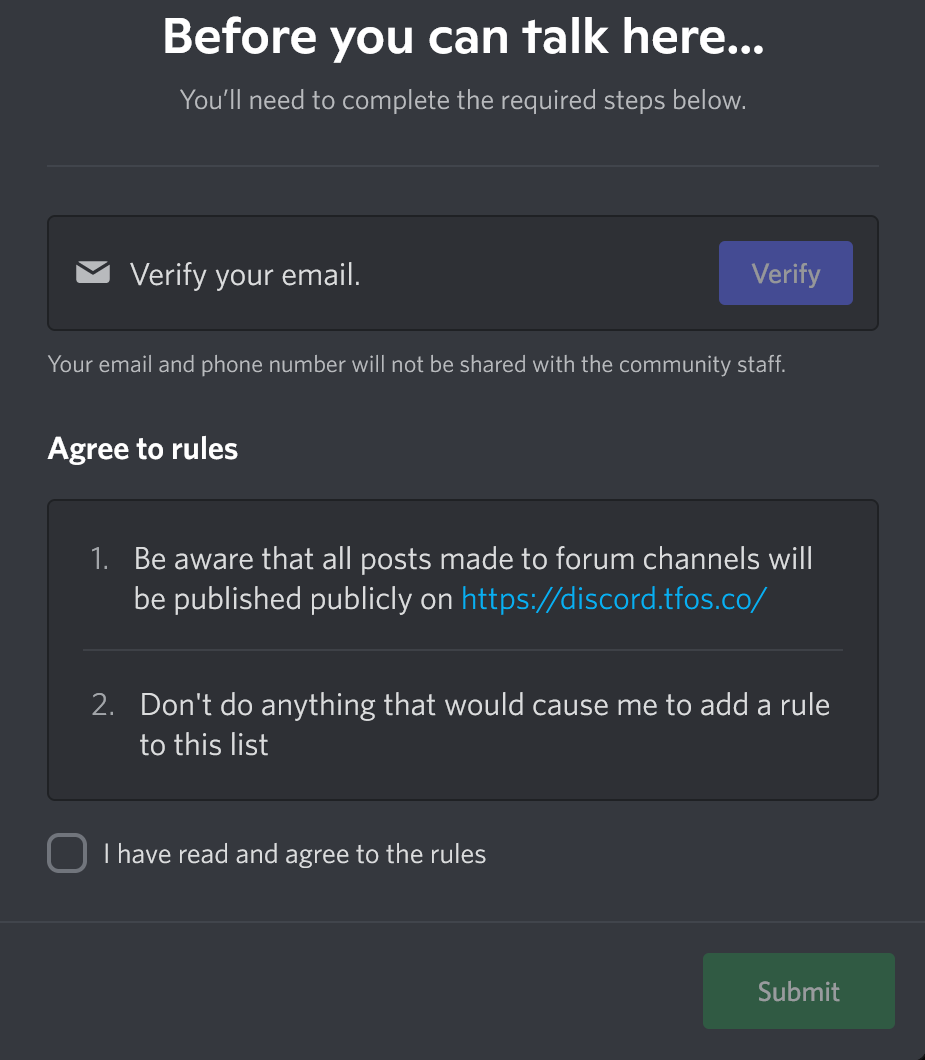 Is that enough? If a bunch of people installed the Forum Publisher bot, would many of them even bother to add similar notices to their servers? Am I over thinking all this?

I don't know! But unless someone from Discord staff were to say "Yes we'd love to capitalize on all the social unrest over in Twitland," I would want to think twice before I go all gung-ho on recruiting people to migrate to Discord and install my bot.

So instead, I'm using my open-source Fridays to build a new Discord-esque forum/chat/discussion platform—and this one will have public communication baked in from the start. More on that later. Subscribe if you want to stay in the loop.

Last week: besides the Forum Publisher bot, I added an Instapaper integration.

Yakread Roadmap, starting out with stuff I got sidetracked from: