Last week I discussed some tweaks I made to Yakread's home feed in an ongoing attempt to make it 👍👍👌🙂. My spiritual advisor made an additional suggestion: switch to a traditional scrolling timeline instead of the current fixed batches of five links.

My immediate reaction to this was negative. I kind of like having the frame of mind be "here's a small finite batch of links; pick the most interesting one." Also, I've learned from previous products that if you give people the option of cycling through a bunch of recommendations quickly, they will often do just that. I like that the fixed batches force you to pick a link and actually open it instead of forever skimming and scrolling. However, as I worked out some of the details in my mind and imagined myself using the timeline... it actually seems like it could be really nice. Worth trying out at least.

For one thing, I'm finding recently that often the batches I get don't have any interesting links in them. I think I may have simply gone through a lot of the interesting links I had previously bookmarked, so the average quality of the bookmarks I have left is lower. It's not a huge deal, since when there aren't any good links, I can just click on the "recent posts from Twitter and Mastodon" link, read some of those, and then get a new batch of links at the end. But, a timeline would make it easier to scan through more of my bookmarks etc and find the gems instead of retreating to social media.

Second, a scrolling timeline could make it easier for Yakread to deliver the right balance between showing you what's new and showing you valuable things you might've missed. Perhaps when you open Yakread, it starts out showing you all the latest unread posts from your subscriptions and articles you've bookmarked recently—anything that hasn't shown up in your timeline at least once already. After that, it would switch to showing a mix of recent and old posts, as selected by the algorithm (i.e. what it does now).

That could deliver the best of both worlds. Yakread could satisfy your "what's new" urge (which in my experience is helpful for getting me to open an app in the first place) and avoid the feeling of "am I missing anything important because the algorithm is filtering it out?" And it would do that without your timeline ever getting clogged up by too many subscriptions or bookmarks. You can skim through the "what's new" recommendations, knowing that anything you skip will get surfaced again by the algorithm later.

I have a feeling that this might be just what Yakread needs to turn it into a killer app.

I wrote a post/comment about Substack, and I added a Mastodon integration. Now you can get your toots and tweets in the same place: 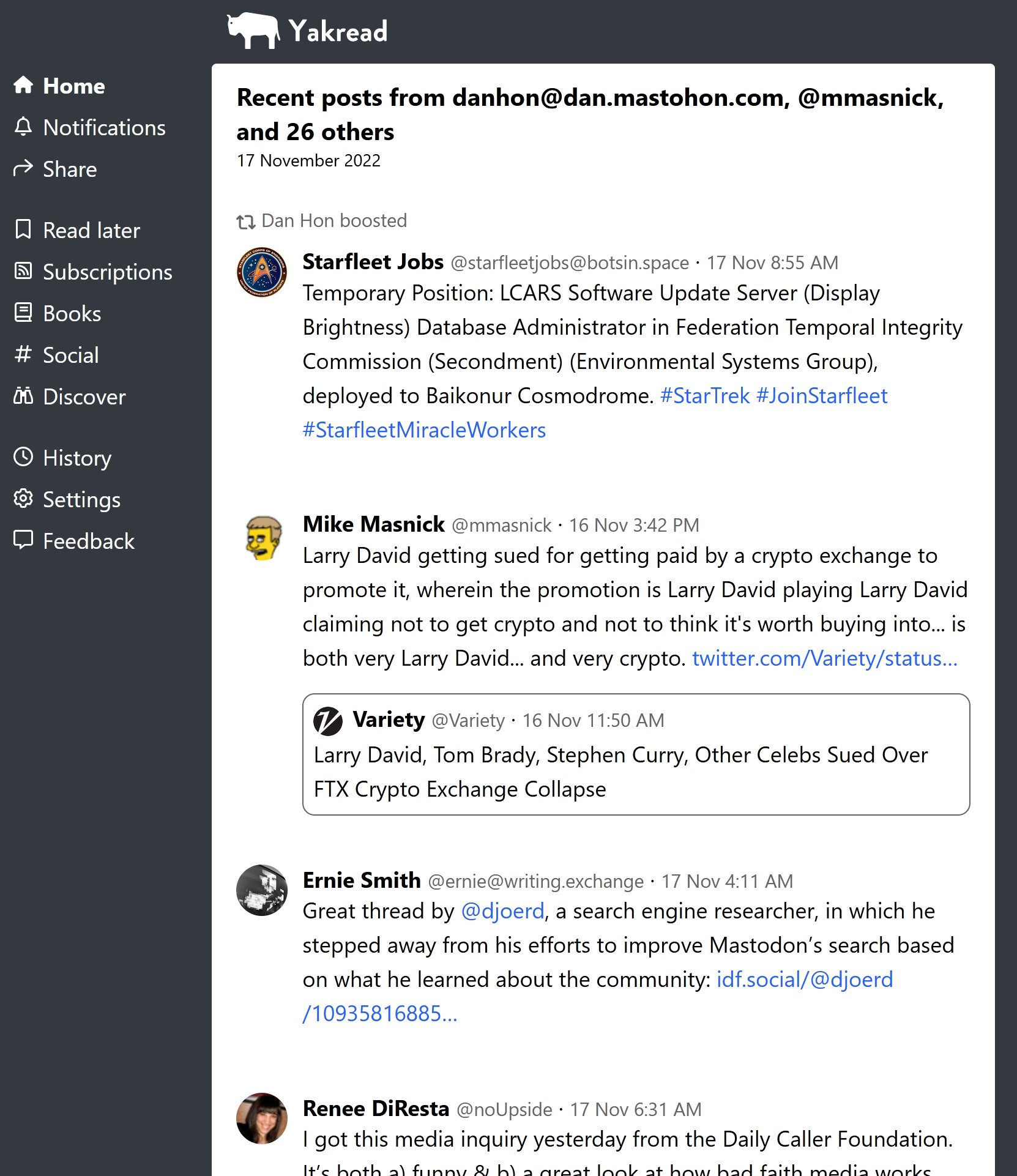 I was going to add a Discord integration as well, but it seems it's not possible. Bots can load the messages for servers they've been added to (if given the right permissions), but you can't make a "Connect to Discord" integration that lets you do the same for regular users, unless I'm missing something. This increases my conviction that it'd be worth building a new discussion/community platform, one that's designed to work well with separate reader apps.

I'm starting out this week by finishing up some open-source work (a tutorial for Biff) that needs to get done by the end of the month, due to it being funded by a grant from Clojurists Together. Between that and Thanksgiving, hopefully I'll get a little time to get started on the new timeline. I'll have to think the architectural design through carefully to make sure the timeline is snappy. (One benefit of batches of 5 links is that it's easier to generate them quickly.)

Then it's still mostly the same stuff I mentioned last time:

Scaling Mastodon is Impossible (Armin Ronacher). "Wikipedia for all its faults shows quite well that a centralized thing can exist with the right model behind it. The software and the content is open, and if WikiMedia were to f--- up too much, then someone else could step into place and replace it. But the risk of that happening keeps the organization somewhat in check."

How to stop using social media (Larry Sanger). "[O]ne thing that really struck me was how poorly informed we would be if we just looked at the stuff that came across our social media feeds. I discovered this when I helped to prepare news summaries daily. There were a lot of important news stories that we found that were not widely discussed in social media, or even in most of the mainstream media."

What Liz Truss Proved (Persuasion). "Rosenbluth and Shapiro chronicle how reforms that weaken parties in the name of grassroots involvement fail. Such reforms, they argue, 'feed political dysfunction and produce policies that are self-defeating for most voters, even those who advocate the decentralizing reforms.' They end up leaving voters more dissatisfied with the political system, and less able to hold their leaders to account."

Building Substack | Sachin Monga (Lenny's Podcast). An interview with Substack's Head of Product. He previously worked at Facebook, which means he has an interesting perspective. He mentions that Facebook's advertising business model did make it more difficult to build the ideal product for users. Lots of people hate on ads of course. I usually dismiss claims in this genre as self-serving narrative, but coming from a former Facebook PM makes it more credible. I've updated my priors a bit.

Nuclear weapons are not as destructive as you think (Naval Gazing). "In fact, nuclear weapons are not a threat to humankind, and we can expect a vast majority of people to live through a nuclear war. None of this is to say that nuclear war wouldn’t be a big deal, or a terrible humanitarian catastrophe, but it wouldn’t be enough to wipe out civilization, much less the human race or all life on Earth." Stephen Pinker discussed this as well in Enlightenment Now.