I made a small update to The Sample's algorithm last week. It will now do a better job of distributing forwards to different newsletters more evenly, without decreasing the total number of 1-click subscribes that occur.

Specifically, I've made it so we no longer take readers' topic selections into account for organic forwards. To explain what that means: when new readers sign up, they can pick some topics they're interested in: 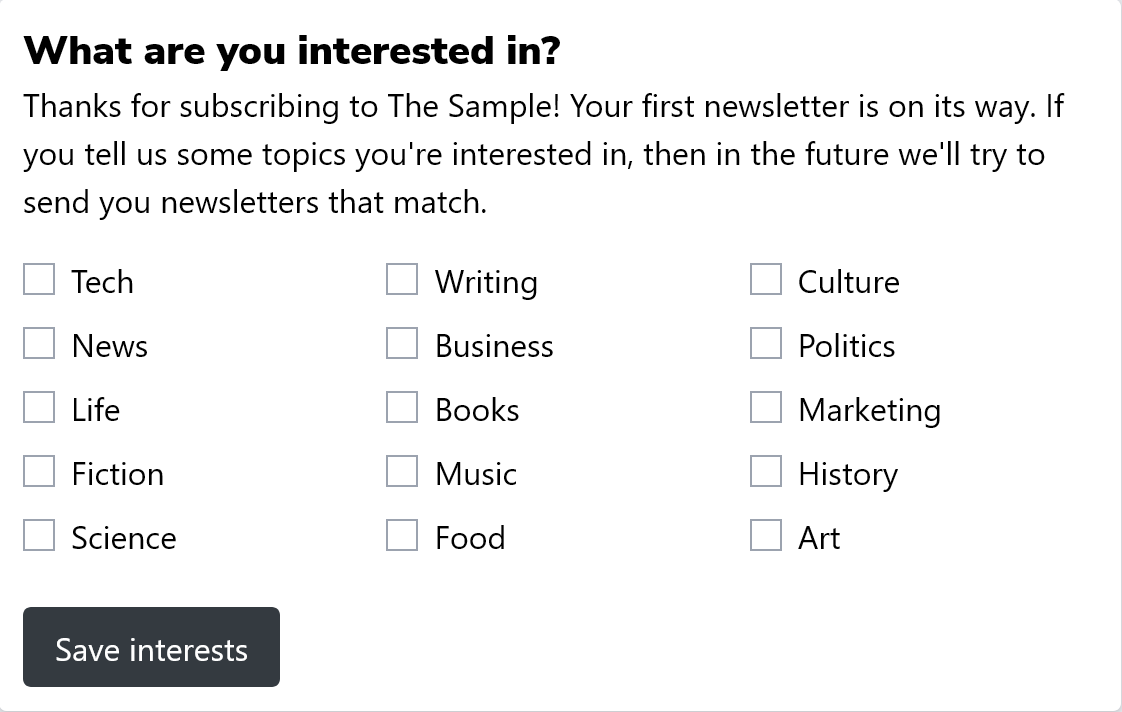 When selecting which newsletter to forward to a particular reader, some of the time we'll give more importance to newsletters that match their selected topics, and other times we'll ignore the topics. That helps to increase the variety of newsletters we recommend—we don't want to become too narrowly focused on readers' current interests—and it also conveniently gives me a way to measure how effective the topics are.

Lately I've noticed that in certain situations, using a readers' topics does increase the probability that they'll subscribe to whichever newsletter we end up forwarding to them, but in other situations it doesn't. In particular, using topics for paid and cross-promotion forwards helps (in the case of paid forwards, topics increase ad revenue by 30%), but for organic forwards—i.e. the "default" forwards you get for free if you've submitted your newsletter to The Sample—it hasn't been making a difference.

One downside to using topic interests is that many, if not most, newsletters don't really match any of the topics. Forwards tend to be concentrated more in newsletters that do match. So as of last week, the algorithm now ignores topics entirely when distributing organic forwards, but it continues to use topics for paid and cross-promotion forwards. This works out pretty nicely since distributing forwards evenly is mainly a concern for organic forwards. For paid forwards I just do whatever makes the most money 🙂. And for cross-promotion forwards, either way we'll continue giving you forwards until a certain threshold is met; so topics don't affect how many forwards you get.

As for Yakread, last week I did a bunch of behind-the-scenes stuff. For example, I restructured some things to make Yakread less likely to crash, I set up email alerts so I'll get notified whenever it has an error, that sort of thing. I also set up an admin dashboard thing so I can keep an eye on the business metrics: 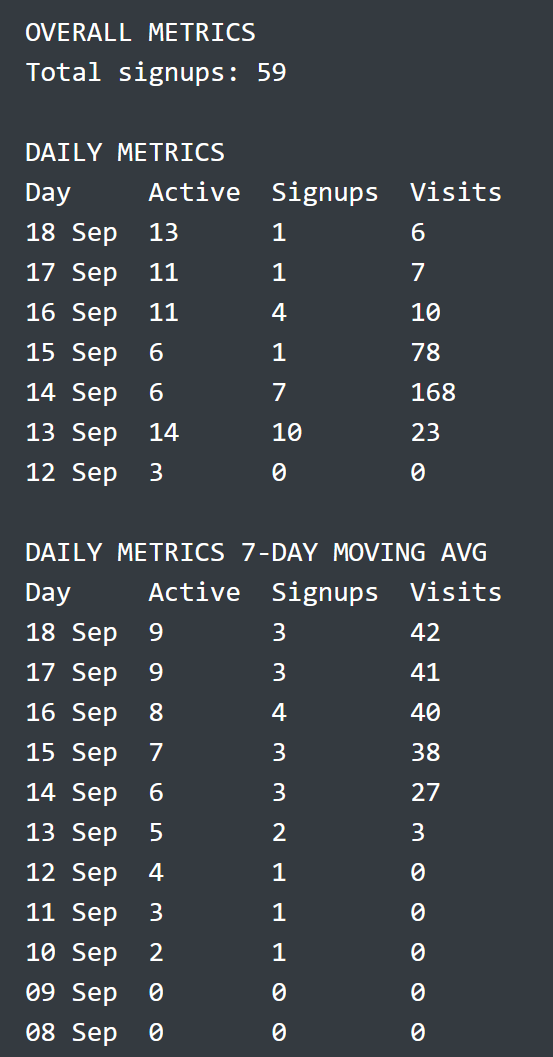 "Active" is the number of people who used the product on a particular day. "Visits" is the number of unique visitors we had on the landing page. I'm not sure how accurate visits are between the 13th and the 15th because during that time they were including bots (for example, search engine crawlers from Google et. al.).

Also the number of active users jumped on the 10th because that's when I added daily emails. Consumer apps usually solve this problem by sending you a bunch of phone notifications, but email works quite well too. (Sorry not sorry.)

With the metrics monitoring stuff in place, I could start marketing more heavily. And then the dashboard can tell me e.g. is the landing page working well, do people tend to keep using the product after they sign up, which traffic sources work best for Yakread, etc.

I might do some low-hanging-fruit marketing stuff, but I've decided to spend at least a few more days making product improvements. e.g. next I'll make it so you can upload PDFs to read later since it was requested (it's also a feature I'd like to use myself occasionally). There are also a few other improvements that I think would be significant based on my own experience using the product:

Maybe once that's done I'll get more into marketing. I've been thinking about doing an integration with The Sample, and building out the existing Twitter integration, in order to help funnel in readers from both of those places. And possibly also do some kind of referral program like The Sample's.

But top priority is making the product excellent, so as long as I have worthwhile features to build, I'll do that. Be sure to let me know any feature requests you have so I don't have to do marketing—if I put it off long enough, maybe Yakread will grow just from word of mouth 🙂.